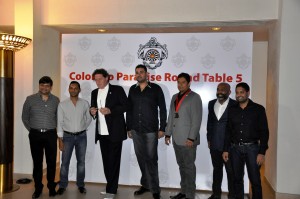 The godfather of modern cooking, three Michelin star celebrity chef and Judge of MasterChef Australia, Marco Pierre White was hosted by Cinnamon Hotels & Resorts in collaboration with the British High Commission from January 18th to the 31st.

Marco Pierre White is a British chef, celebrity restaurateur and television personality. He is noted for his contributions to contemporary British cuisine. White has been dubbed the first celebrity chef, and a trend setter of the UK restaurant scene. White was, at the time, the youngest chef ever to have been awarded three Michelin stars. He has trained chefs including Gordon Ramsay, Curtis Stone and Shannon Bennett.

Colombo Paradise Round Table 5 a leading Community Service club in Sri Lanka recently conferred Marco Pierre White as an Honorary Member of Round Table 5 in recognition of his contribution towards the Table’s charity : The Ceylon school for the Deaf and Blind, Ratmalana.

Round Table is all about building relationships with a group of like-minded personalities while at the same time striving to help the local community. Round Table was inaugurated by Louis Marchesi who had the brainwave of starting a new organisation for young men between the ages of 18-40. Round Table was born with the motto ‘Adopt, Adapt, Improve’ and from small beginnings of one club in Norwich, Louis’ dream has become a reality, with over 3,000 clubs Worldwide and over 300,000 members. Round Tables operate individually but with a common cause, and together they form Round Table International. Round Table exists throughout the world and has links with like-minded clubs internationally.

Colombo Paradise Round Table 5 together with Trekurious hosted a function on the 22nd of January where funds were raised through ticket sales as well as personally autographed aprons by Marco Pierre White. Nett proceeds were donated to The Ceylon school for the Deaf and Blind, Ratmalana.

Speaking at the Event, Colombo Paradise Round Table 5, Secretary, Mr. Rae Devadason stated “We are happy to induct Marco Pierre White in recognition of his contribution towards our Charity. This is a great moment in highlighting the needs of differently abled persons and we as a community should strive to uplift the lives of those who need our support. Our club has taken up a variety of community service projects in the past such as the Renovation of an Elders Home (2013), raising all the funds required for building a Vocational Activities Centre for “The Refuge – Home for Girls” (2014), providing Audio Visual and Essential Equipment for the Ceylon School for the Deaf and Blind (2015); as well as meeting the needs of other charitable institutions. Colombo Paradise Round Table 5 President, Hazim Abdul Cader stated “We as a club of young businessman are proud of doing our part towards our community”.